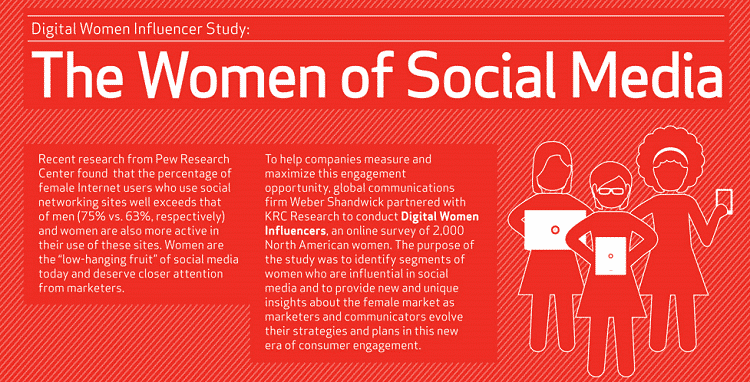 For all the talk we hear about women and their domination of Pinterest, there should be equally as much talk about where the female population stands with other networks.

The team at marketing agency Weber Shandwick recently pulled together a nice subset of social media data points that attempt to explain how women influence and offer their voices to the social media spectrum.

Of those women who use social media the average time spent on social sites is 12 hours per week.

But women don’t just like social media, they influence people, brands and movements. The study found women who use social media are almost double as likely to recommend a brand to their friends and family. The study also found that social media women are more likely to ask for recommendations when it comes time to buy products. Women are also influential in their never ending question to re-tweet brands and products and to re-pin their favorite things on Pinterest.

Most interestingly from an influence point of view, women who use social media accounts are almost double as likely to post comments about products on forums, websites and via e-commerce platforms. Those same women are also more likely than non-social media using women to post photos of products they like or disapprove of using.

The US arms sale industry is large and successful. More than 30% of exported weapons in the world come from the United States. They supply to no less than 90 nations making it one of the largest suppliers of weapons in the world. The US makes an estimate of almost 200 Billion dollars in annual… END_OF_DOCUMENT_TOKEN_TO_BE_REPLACED

Now that the election results are almost final, we all want to ask what’s going to happen to Donald Trump after leaving the office? All US Presidents inevitably reach the point where they leave the White House.  Besides, the constitution states that all US Presidents are subject to a two-term limit. What do former presidents… END_OF_DOCUMENT_TOKEN_TO_BE_REPLACED

This is the first time in modern history that the US held presidential elections in the middle of a pandemic. In truth, the US elections may have overshadowed COVID-19 and the side effects are limitless. America is facing a tough crisis of discontentment with the current administration. An understandable case but a situation that may… END_OF_DOCUMENT_TOKEN_TO_BE_REPLACED