by Neal Campbell 10 years ago9 years ago

Monday night on ABC Family, fiction blended with reality when the hashtag #TakeBackCarlton became a Twitter trend during part one of the spring finale of Switched at Birth.

The episode was historic because it was acted almost entirely in American Sign Language. There was a little verbal dialogue at the beginning and end of the episode entitled, “Uprising,” but the bulk of the show was without vocalization.

Interviewed by Robin Roberts on Good Morning America, Marlee Matlin, who plays a guidance counselor on Switched at Birth, said:

“It is an amazing, amazing journey for me because having been in the business for 28 years, where I began trying to get my language, American Sign Language, across to anyone who happens to watch a film or television program. Now to be able to have the opportunity to see deaf culture/sign language … not have to explain it … just show how beautiful it is as a culture and a language.”

The episode revolves around students coming to terms with the closure of Carlton School for the Deaf. Carlton students decide to take over the school building in protest to try and get the school board to reconsider its decision to close their school.

On the show, students took to social media to tell the world about their protest. Fictional tweets started coming in with the hashtag #TakeBackCarlton, just as it happened on the show, ABC Family added the hashtag as a graphic overlay. Soon after that Marlee Matlin tweeted in real life that #TakeBackCarlton was trending:

Hashtags were introduced to Twitter by users in the early days of 140 character sharing as a way to categorize tweets by topic. According to The New York Times Magazine, the first use of a hashtag on Twitter was proposed by Chris Messina to collect conversations about #BarCamp. Soon after that, Twitter formally adopted the hashtag and connected hashtags via hyperlink and search.

Twitter’s own analysis of hashtags associated with TV shows found that they serve as a kind of “creative EKG.”

The use of hashtags spike during emotional moments of a show, and that’s exactly what happened during Switched at Birth. As students stormed the steps of Carlton carrying signs reading, “Take Back Carlton,” viewers watching at home were caught up in the emotion and a fictional Twitter trend became a real-life Twitter trend. 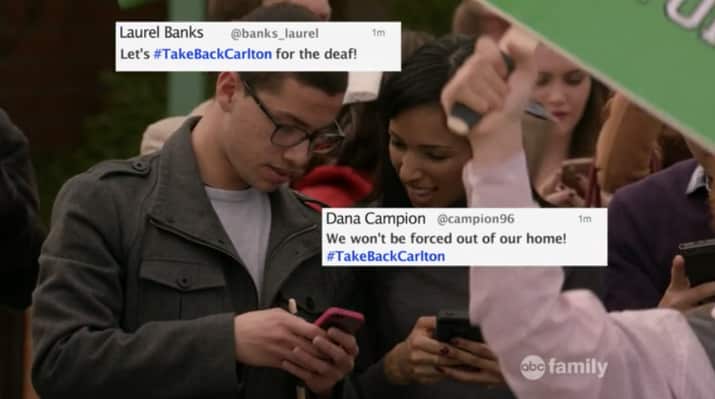